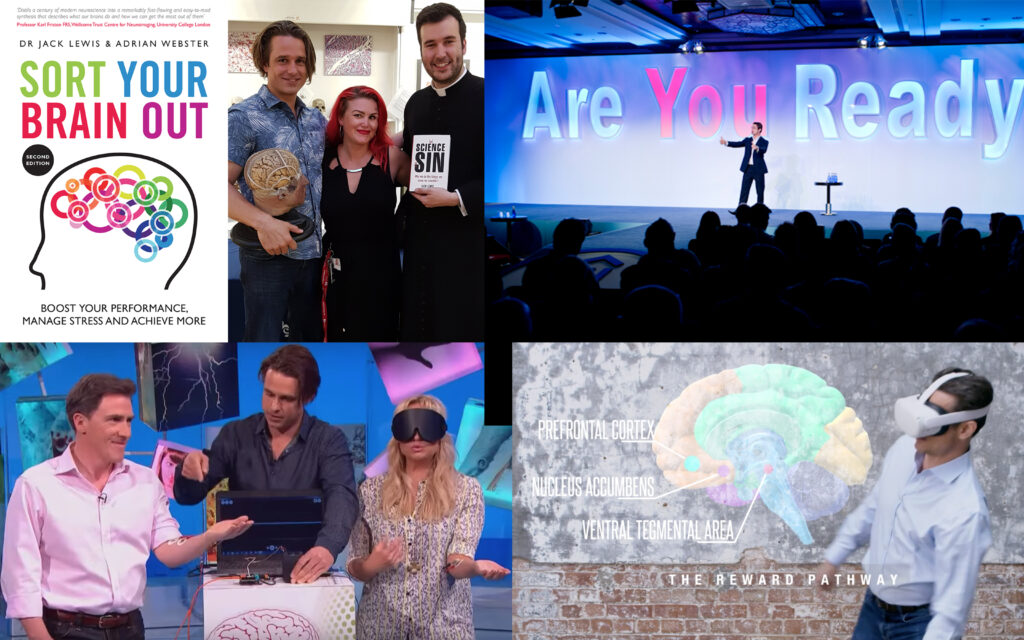 For over twelve years now I’ve been writing a monthly Brain Blog (latest ones just above) so there are plenty of articles bundled into various categories (in the panel on the right if you’re on a computer, or at the bottom of this page, if you’re reading this on a phone).

While my full biog can be found via the menu, in a nutshell my mission is to get people feeling more in control of their personal and professional lives by helping them understand the many things they can do to get their brains functioning at full potential.

I’ve developed five talks that I’ve given all over the world as a keynote speaker appearing at business conferences across many different industries. I’ve also written several books (Sort Your Brain Out, The Science of Sin) and presented many science TV series (e.g. Secrets of the Brain, airing daily on various cable channels and streaming at Curiosity Stream).

I’ve also appeared as a brain expert in several documentaries (e.g. I Am Gen Z) and on several prime time TV shows like Duck Quacks Don’t Echo, Ranganation and Big Brother; helping Rylan understand what’s going on in the brains of his celebrity contestants (see below). I was surprised by his enthusiasm for neuroscience, but then again he’s smarter than he lets on…

This next one was a fantastic project to be a part of, as it merged my two major passions in life: brain science and virtual reality. We used virtual reality to take a volunteer on a voyage inside their own brain in a short film for the gambling charity GamCare to help people understand some of the process that lead to addictive behaviour…

If you’d like to book me for a talk or to present a film or TV show, please don’t hesitate to get in touch with my agent.