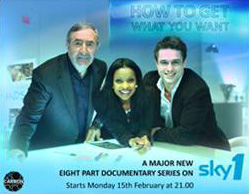 My most recent major project consisted of 26 x 30 min episodes of a brand new flagship series for Discovery Science made by REEF TV called “The Tech Show“; probably best described as a Tomorrow’s World for the 21st Century.
The Tech Show showcases the latest breakthroughs in science, technology and engineering. My personal favourites include the super-geek who creates tornados in his garage, the Red Bull pilot who can do a loop-the-loop in a helicopter, the sand lizard who escapes predators by sending travelling waves down the length of its body to burrow, in the blink of an eye, into densely compacted sand and the robot that can track and catch fast moving objects. This series is currently being broadcast across Europe, Africa and the Middle East.

Last year I got my own strand on ITV’s This Morning called “Don’t be a Slave to your Brain.” A fantastic opportunity to showcase ways to improve our memory, decision making and strategies for keeping the symptoms of dementia at bay for as long as possible.

I thoroughly enjoyed the experience of doing live television and was amazed that my first 10 min appearance resulted in a 33% increase in Twitter followers! Talks are ongoing about bringing this strand back again, even bigger and better by committing a camera crew to accompany me in an investigation of the latest brain research, at some point over the course of 2012.

Last year I also finally managed to get a foot in the door at Channel 4 by contributing to two primetime series:

In “The Secret Life of Buildings“ I used EEG to measure the brain activity from the grey matter of none other than Tom Dyckhoff, The Independent’s architecture critic, whilst he tried to pen an article in an open plan office. We demonstrated that, even when unaware of surrounding distractions, like movement in your field of vision or noises/conversations in the nearby environment, the brain nonetheless diverts precious resources away from thinking to process them.

The other Channel 4 series was Tony Robinson’s dramatic reconstructions of historical accounts of “Gods and Monsters.” My role was to discuss how modern neuroscience would account for the symptoms that people exhibited when accused of being possessed by the devil.

I also tried my hand at providing some neuroscience-informed romance tips regarding how to make a good impression during a date for MTV‘s “PLAIN JANE.” Predictably enough, any mention of brain areas vital for human bonding, neurohormones involved in sex drive, love and long term bonding etc. hit the cutting room floor. However my contribution to the first series was deemed worthy of an invitation to participate in the second series during which I got the distinct impression that some of the science would survive the edit this time. Fingers crossed!

I first got involved in television as a science consultant (and later featured actor) in Emmy Award-winning, feature-length, biology documentary “Inside the Living Body” made by PIONEER PRODUCTIONS as a co-production for Channel 4 and National Geographic.

My first break in presenting came shortly after receiving my PhD from University College London, when OBJECTIVE PRODUCTIONS offered me a role as a presenter performing secretly-filmed social psychology experiments on unsuspecting members of the public for 20 x 1 hour-long episodes of “People Watchers” for BBC2.

This was followed by a strand on ITV’s THIS MORNING called “Teen Club” where I was called upon to explain exactly what goes on inside the adolescent brain.

I then put my science consultancy hat back on to help develop two television series: one for Silver River and another for Tigress Productions.

I then contributed some talking heads material for LIBERTY BELL PRODUCTIONS on the subject of sexual attraction in “How To Get More Sex” which aired at primetime on ITV.

In 2008, the Institute of Engineering and Technology decided to modernise their Faraday lectures by commissioning 4 x 15 minute films about “Technology for Life” which won gold at the International Video Communications Association awards. As the Face of Faraday 2008 I presented these films, made by HAWKSHEAD/RADLEY YELDAR, and also several live events all across the UK, produced by SHINING WIT. The aim was to promote Science, Technology, Engineering and Maths in the eyes of 12-16 year old children… a cause very close to my heart.

Teacher’s TV were so impressed with the quality of these BAFTA award-nominated films that they decided to buy the rights to air the films on their channel.

Whilst doing post-doctoral fMRI brain scanning research at the Max Planck Insitute for Biological Cybernetics, I used some of my spare time to provide consultancy services to help develop a documentary for BLINK FILMS.

During this period I also consulted for TIGER ASPECT PRODUCTIONS in the design of scientifically-rigorous games for the Channel 5 quiz “Britain’s Best Brain” presented by Zoe Ball and Jamie Theakston.

Upon my return from Germany, I immediatly started filming for “Naked Britain“, made by CARBON PRODUCTIONS for Sky One – my first solo presenting job.

A further series “BODY LANGUAGE SECRETS” a.k.a. “How To Get What You Want“, also made by CARBON PRODUCTIONS has aired on Sky One, Sky Two and Sky Three throughout 2010 and has been repeated throughout 2011 and 2012. My role was to help explain what goes on in our brains during a wide range of human behaviours: from love and attraction to money and power.

In addition to these regular brainposts you can catch my #braintweets by following me on Twitter.